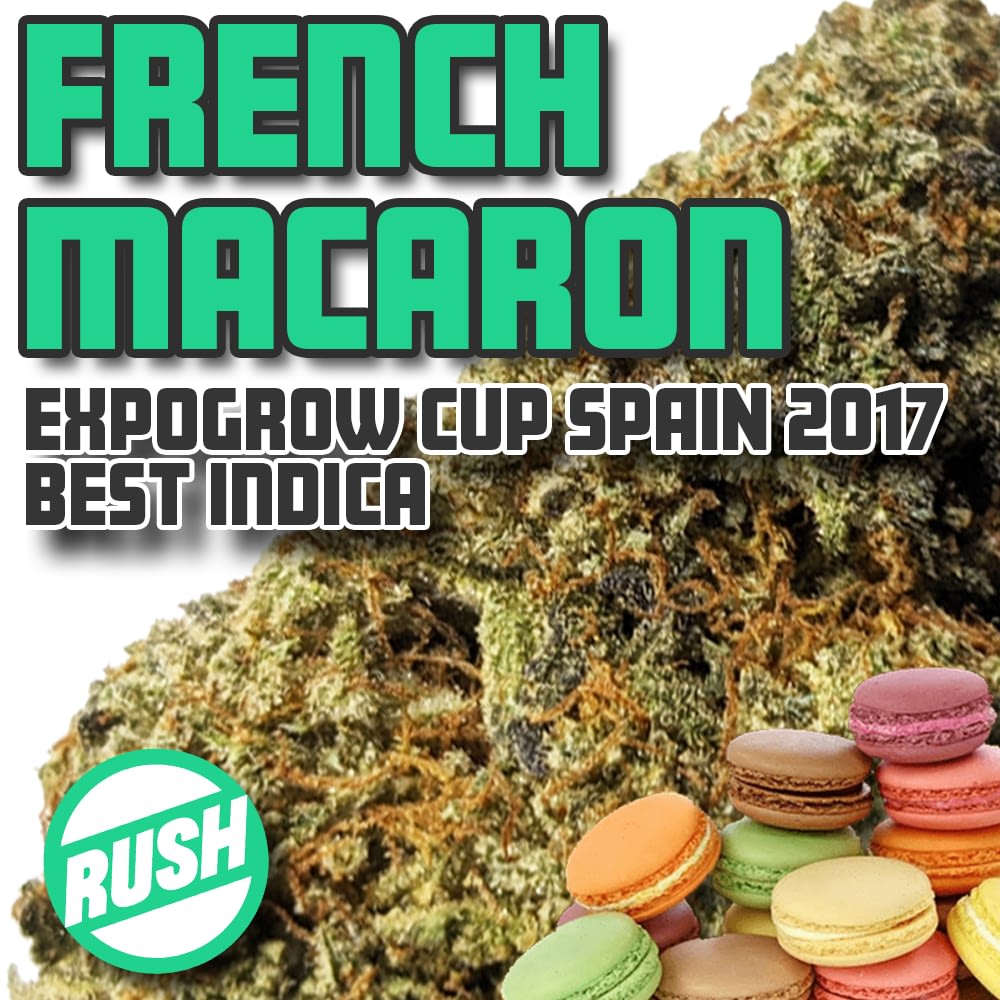 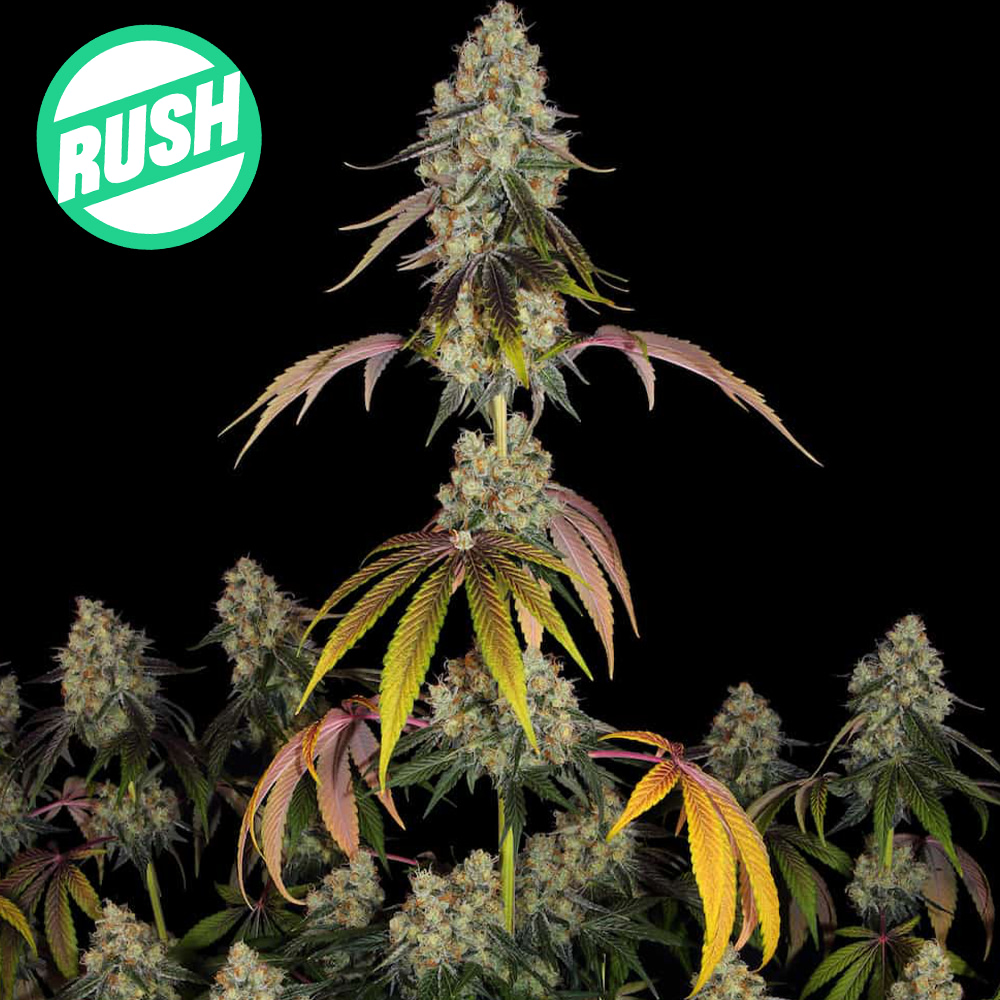 Mr. Black Farms has outdone themselves this time with their version of the Award Winning Indica Dominant strain known as French Macaron. French Macaron is the product of crossbreeding Gelato 33 and French Cookies strains. This pairing results in a powerful strain that exhibits rare tastes and aesthetics. French Macaron is named after the gourmet, mouth-watering cookie from France, which is essentially icing sugar sandwiched between two semispherical pieces of almond-flavored meringue.

The unique and rare terpene profile within the flowers of French Macaron douses the tongue in a medley of flavours. Hints of heavy cream and sweetness merge on the taste buds to replicate the rich and distinctive tastes of a macaron. Buds also emit interesting scents of musk and gas.

The Indica-dominant genetics of French Macaron offers a stoney and physical high. Taking a hit of this strain after a long day of work will release stress and tension. The high comes on fast and generates feelings of relaxation, happiness, and euphoria. These feelings eventually trail off into sleepiness and immense hunger. The mind-blowing flavour profile will ignite a serious case of munchies, especially for something filling and sweet.

Aside from taste, another feature of French Macaron that is unique is her physical appearance. Her flowers and leaves boast stunning shades of purple during the later stages of bloom, made even more beautiful by the bright orange calyxes bursting through. Not only do these traits make her look gorgeous in the grow room, but the finished buds are a great way to impress friends during a smoke session.

The superb cookies genetics from California are simply too good not to develop a couple of sublime hybrids from. That’s why T.H.Seeds, the company responsible for the popular French Cookies strain, released the Cookies cross French Macaron, consisting of Gelato 33 x French Cookies. In search of an appropriate breeding partner, T.H.Seeds paired up with the Cookie Family, whose Gelato 33 is a delicious hybrid of Thin Mint Girl Scout Cookies (a special GSC phenotype) and Sunset Sherbet (Girl Scout Cookies x Pink Panties). And with French Cookies having been developed by T.H.Seeds from a bag seed found in original GSC flowers, there’s a damn lot of Girl Scout Cookies contained in French Macaron!

As you probably are aware, a macaron is a French meringue-based pastry made from almond flour, available in diverse colors. So for a Cookies-dominant variety, this is a very suitable name that also implies that it produces very colorful plants. In addition, fittingly, French Macaron was bred in France by the French department of T.H.Seeds. This new indica-dominant plant brings together some of the best traits of the parental strains, such as the dense, tightly clustered, resin-dripping buds of French Cookies. With 500-600 grams per square meter (g/m2), yields are above average. The plants need to be flowered for nine weeks for such opulent results, but patience will pay off as the strain can potentially achieve heights of 35-45 inches. Comme il faut for a French gourmet treat, French Macaron offers both an exquisitely complex and unusual aroma merging notes of gas, musk and cream, “reminiscent of a sweet, creamy dessert,” raves T.H.Seeds about its creation, which is expected to elicit creativity and happiness. At the Expogrow 2017 fair in Spain, French Macaron instantly carried away the victory in the indica category, causing quite a stir shortly after its release.

For our report, we entrusted cultivation duties to the Doc, who happily took care of this new Cookies strain from T.H.Seeds. Two feminized seeds were germinated and quickly popped open. After a bit more than two and a half days, the two seedlings showed up above the ground. In their three weeks of vegetative stage, they displayed a decidedly indica-leaning growth pattern by becoming stocky and bushy, with tight internodal stacking, fairly wide leaves and thick main stems. Ultimately, they hadn’t grown beyond heights of 10 and 11 inches when the Doc moved them into flowering. “They’re beautifully uniform so far, just as is typical of T.H.Seeds,” he noted of his French Macarons.

Both plants revealed a willingness to bloom at just one week after having switched to a 12/12-hour light/dark photoperiod, and the Doc detected female pre-flowering. In the following weeks, they were stretching about two and half times their vegetative height, while still maintaining a bushy appearance. After four weeks of flowering, the Doc reported: “Still two absolutely homogeneous plants. There’s been dynamic outward side-branch growth, and they are meanwhile sprinkled with young, roundish flower heads, which, thanks to a very early resin-gland onset, are already enticingly glistening. Really looking great! And as we all know, weight gain will be on the agenda in flowering weeks four to six.”

Two weeks later, the Doc confirmed that “the plants got thick and also immensely resinous! The indica dominance is also reflected now by the shape of the flowers, as they are fat and bulbous.” Having been completely green in the vegetative stage, the two French Macaron plants now displayed a varied range of colors. Some of the older shade leaves turned purple to red in part or entirely, and with maturity drawing nearer, yellow was added to the mix, partly in an attractive striped pattern. The upper quarter of one plant turned completely purple, including the buds, while the other one was predominantly purple. According to the Doc, “These plants have put a multicolored garment on, oh so lovely! It’s one explosion of colors, as if they were celebrating carnival. And then there’s this massive silvery-white trichome coating on the calyxes, sugar leaves and partly even the shade leaves—what a drop-dead gorgeous view! Smell-wise, they’re matching T.H.Seeds’ description, exuding a heavy, sweetish and slightly tangy bouquet the distinguishing elements of which are gas and musk.”

The two French Macaron plants had become almost identically tall at heights of a bit over two feet. To the Doc’s surprise, they turned ripe five days ahead of schedule—instead of on day 63, he could pull out his scissors on day 58 and cut his fully mature beauties up into their rock-hard flowering parts. That made the doyen of indoor growing enthuse, “That’s a rare case—the plants have finished almost one week earlier than officially stated and nevertheless are of jaw-dropping quality!” But also in terms of quantity, the French Macaron plant amazed the Doc: Their dry yields together amounted to a bodacious 178 grams—almost 90 grams per plant. “A fantastic achievement, given that relatively small plant size,” the Doc explained.

In their dry form, most of the buds had a bluish-violet appearance, overlaid by a now even more awesome-looking frosting of resin with a white glow. “This stunning look almost had me drooling out of my mouth,” swooned the Doc before he ground a French Macaron nugget for a vaporization test. It almost felt as though he’d get high from the super-heavy, pungent odor alone that was rising up, as that heavy sweet-and-tarty fragrance had further thickened over the drying process and now seemed like a concentrate to him. The olfactory sensation continued when he took his first puff off the vaporizer—the highly aromatic vapor covered his entire mouth in flavor molecules, leaving a long-lasting spicy-sweetish aftertaste. Exclaimed the Doc: “Delicious! This full-mouth taste reminds me of a good cigar.” Three deeply inhaled drafts were enough to make him feel the effect of French Macaron. It was as if someone had started to hypnotize him: He stared into space, zoned out and, after two more vapor clouds, drifted into a trance-like state, letting loose physically, too. Sorrows and stress completely melted away, and this mental and physical feeling of total ease made for a sense of overwhelming happiness and contentment arising from deep within him.

Of course, he loved this state of mind and decided to listen to the “Classical music for dreaming” Spotify playlist via headphones, which was a perfect match, indulging his senses and further deepening his state of meditation that lasted for more than two hours.

“French Macaron undoubtedly is another stroke of genius by T.H.Seeds,” the Doc summarized. “These Cookies-dominant genetics offer a bewitching play of colors, high yields, and a top-notch taste and effect, leaving nothing more to be desired!”

Only logged in customers who have purchased this product may leave a review.